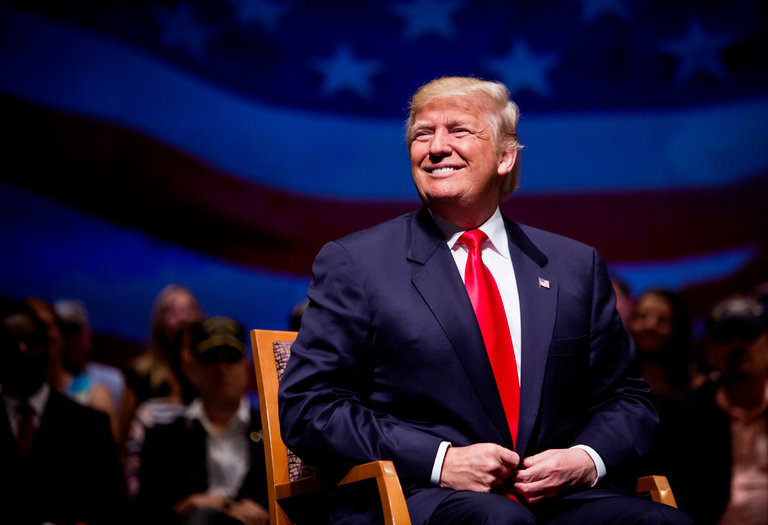 Via The New York Times

After spending the last two weeks hemming and hawing on immigration policy, Donald Trump shifted his campaign’s focus to a variety of foreign policy issues. From a townhall-style speech in Virginia Beach with retired general and supporter Mike Flynn and a proposal to buildup the military to his participation in NBC News’ Commander-in-Chief Forum on Wednesday night, Trump’s lack of substance rhetoric was on full display. His dialogue was a combination of bypassing tough questions with lobbed criticisms, unrealistic policy proposals, and inane ramblings about Putin, ISIS, and high quality oil. Taken together, Trump’s statements half reveal and half conceal the soul within to badly quote a great poet. But if Americans really thought about all these rumblings and had any inkling of their import they would have cause for real fear for our country and the world.

However, when sifting through Trump’s comments, its easy to tell when the Republican presidential nominee is sticking to his scripted and evasive talking points and when the conversation goes off the rails. Its during these latter moments when a glimpse into Trump’s misinformed and flawed world view is revealed. Yet even his “scripted” utterances show a lack of understanding of how complex the international landscape is and that even his “experts” who wrote the texts, seem out of their depth and badly ruled by ideology and politics rather than sound judgement.

In an address in Philadelphia on Tuesday, Trump proposed a military build-up, set forth a new plan to deal with ISIS, and suggested he would avoid the previous administrations’ pitfalls of walking into armed conflicts in the Middle East. Trump’s proposed buildup would include raising US troop levels from 470,000 to 540,000 and modernizing 22 Navy Cruisers. Trump’s proposal painted a picture of America’s waning military might and the nominee referred to the philosophy “peace through strength” that late President Reagan embraced. In order to pay for this military expansion, Trump suggested that he would lift the ‘sequester’ defense spending caps made in 2011, while trimming the budget outside of the military through federal work force attrition, correcting government spending inefficiencies, and collecting billions of unpaid tax dollars.

Although this proposal was made to bolster Trump’s credentials with veteran voters, it has drawn fiscal concerns raised by independent budget estimators. The bipartisan Committee for a Responsible Federal Budgets estimates that even with Trump’s proposed offsetting budget cuts, his military build-up would cost $150 billion over ten years. Dov Zakheim, a Pentagon top financial officer in the Bush 43 administration, states that “the whole thing is unrealistic … it’s a soundbite.”

Trump’s proposed increase in defense spending is a headscratcher when viewing his previous stances. He frequently takes potshots at military engagements supported by Hillary Clinton and President Obama. Trump also cites the growing federal debt as a reason to withdraw military and financial support from our NATO and East Asian allies. If Trump has been running on a platform of reduced military presence abroad, shrewd negotiations, and a focus on domestic issues, this proposed defense build-up is an example of paying lip service to conservative military philosophy and an attempt to secure enlisted votes.

But it is more than even that, it is an irresponsible debt burden with no end and aimed at weakening our domestic security and risking massive confrontation abroad. Trump’s approach is at the expense of programs that would truly “Make America Great” like better education of our children, better affordable universal health care, solving our deteriorating infrastructure, funding higher education in State Schools of students that will contribute greatly to American progress, security, and productivity, and not least investment in preventive diplomacy and international institutions including strengthening peace making and keeping. These measures are the ones which truly address global challenges that are putting America and the world at risk like climate change, and spread of diseases, massive poverty, inequality, ethnic upheavals, and the many causes of the breeding ground for conflict and terrorism.

Numerous times this week Donald Trump has been pressed to give more information on his solutions to today’s issues and as a reflex he would respond with canned soundbites and deflecting to criticisms of President Obama and Hillary Clinton. During this week’s NBC Forum, moderator Matt Lauer asked Trump if his recent intelligence briefings taught him anything to reconsider his plan to defeat ISIS. His response was a brief dismissal of doubt in his secret plans and an attack on President Obama:

“ TRUMP: No, I didn’t learn anything from that standpoint. What I did learn is that our leadership, Barack Obama, did not follow what our experts and our truly — when they call it intelligence, it’s there for a reason — what our experts said to do. “

These incoherent and confusing statements are meant to cover his own ignorance and possibly to mislead voters as to his real intentions. He clearly does not in fact have a coherent and effective plan to stop terrorism or other crises in our world. The reality is that there is no simple, not expensive and not risky “silver bullet” which will stop the many dangers and conflicts in our work including massive and mostly useless military hardware.  This is in contrast with President Obama, Secretary John Kerry and Secretary Hillary Clinton, who time and time again have underlined the difficulty of setting right our fragile global system, its complexity, and the need for long-term perseverance, caution, wise diplomacy and strategic long-term purpose.

Earlier this week, when asked by Mike Flynn on how he intends to combat the threat of ISIS, Trump proceeded to rant about the rise of Iran as a global power and the negotiating incompetence of Secretary of State John Kerry. As his event at Virginia Beach turned to his strategy to stop North Korean nuclear ambitions, Trump’s answer pivoted from passing responsibility on to China, to Air Force One landing at the G20 Summit. The lack of a red carpet staircase for President Obama was used as a tirade of failed leadership as concerns about North Korea were left unanswered.

Trump’s evasion continued on Wednesday night when asked about his positive comments towards Russian President Vladimir Putin. The Republican nominee defended his admiration of Putin’s leadership by citing an 82 percent approval rating and that “[Putin]’s been a leader, far more than our president has been a leader”. When Lauer listed the many questionable recent actions conducted by Russia, Trump asked “do you want me to start naming some of the things that President Obama does at the same time?”

The inability of Trump to speak ill of the Russian President is a perplexing phenomenon to political leaders on both sides of the aisle. Mrs. Clinton mused on Thursday that “it suggests he will let Putin do whatever Putin wants to do and then make excuses for him,” while current Republican Speaker of the House Paul Ryan reasserted his critical stance of Russia by calling Putin “an aggressor who does not share our interests”.

It seems unimaginable for the Presidential nominee of one of the two major political parties would go through such mental gymnastics to avoid criticizing a former KGB agent. However, when it comes to facing any levels of skepticism, it has become second-nature for Donald Trump to deflect and riposte against his political opponents.

The most bizarre moments during Trump’s speaking events this week came from a crude narrative of the Iran-Iraq War and vivid descriptions of Middle East oil reserves. On Tuesday’s speaking event, Trump’s critique on the Iranian nuclear deal devolved into an argument of emerging Iranian dominance and reminiscence of a war from thirty years ago:

Later on, Trump would become fixated on the quality of oil in Iraq and Libya:

“Iraq has some of the greatest oil reserves anywhere in the world, and so Iran is going to get whatever ISIS doesn’t already have.”

“It’s a total disaster, Libya, right now. You know they have among the finest quality oils anywhere in the world? Their oil is so valuable, so good.”

Although some may think these strange comments are more expected of him at informal events such as campaign rallies, Trump echoed this sentiment atWednesday’s nationally televised forum when describing the dire costs of the war in Iraq:

“I’ve always said, shouldn’t be there, but if we’re going to get out, take the oil. If we would have taken the oil, you wouldn’t have ISIS, because ISIS formed with the power and the wealth of that oil….And we’re the only ones, we go in, we spend $3 trillion, we lose thousands and thousands of lives, and then, Matt, what happens is, we get nothing. You know, it used to be to the victor belong the spoils. Now, there was no victor there, believe me. There was no victor. But I always said: Take the oil.”

Donald Trump’s assertion that the United States should have seized Iraqi oil reserves to pay for its ill-advised war may seem like a smart business move by the real-estate mogul, but from a foreign policy perspective it reeks of neo-colonialism. To suggest depriving a political fragile state of one of its few sources of income wouldn’t prevent the rise of violent extremist groups like ISIS, but rather swell their ranks with local young people who would have had even less economic and educational resources to make a regular living. The use of plundering as a tool of foreign policy would only increase anti-American sentiment among our adversaries and allies.

But it’s hard to see what’s scarier about this most recent turn in Trump’s campaign: his growing ease with using off-the-cuff remarks to mask his incompetence or his willingness to repeat such absurdities until one day they could become policies. These evasive responses, his lack of knowledge, and his off the cuff inclination to do the most dangerous things that make the world clearly less safe, indicate he is a man who should never have reached the position he has, much lest being the leader of the free world and Commander-in-Chief.
We welcome your comments, click here for our main page and comments section.
See our “2016 Campaign” Section of extensive and up-to-date quotes by the candidates.