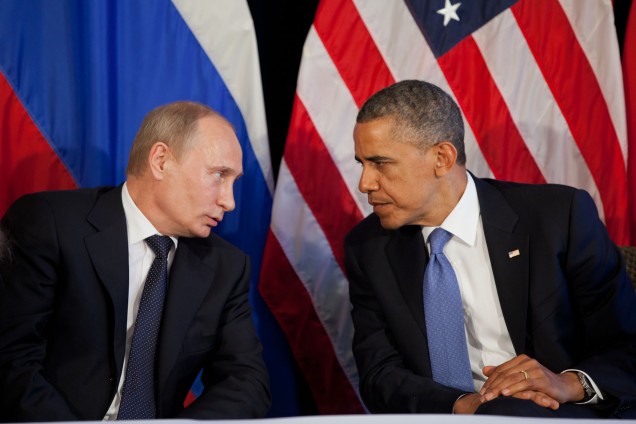 Photo via the White House

In my look at the global landscape for 2016, I addressed the critical issue of the future of US-Russian relations in a section titled “Russia:  A Disaster in Waiting.”  I promised to look again at this question over the course of the year and focus on key risks and opportunities while also adding a bit to a possible long-term “grand strategic perspective.”

I began the section dealing with American-Russian relations with the following:

“If it is true that President Putin’s game is enhancing his and Russia’s strategic and geopolitical standing and he wants to be seen as a major international power, he will be seriously disappointed.  If his game is to make “mock war” with the West, this path and this goal lies in failure and possibly mutual calamity….. If it is to be a responsible state looking to help peacemaking and constructively dealing with the many global challenges we face, he can win that game for Russia’s long term interests.”

The question underlining my analysis was does Putin prefer a “win-win” outcome or a “zero sum game.”  The other issue, which is an unanswerable question, is whether or not Putin is seeking to be a military equal and aggressive global power, or even to intimidate the United State or Europe?  Is he seeking to create regional hegemony along the lines of the old Soviet Union and Warsaw Pact – what are described by Russians as the “near abroad” nations and those over which Putin believes Russia should hold sway.

On the other side, is Putin simply on a the path of irrational conflict with the “West” and in particular America due to both his distaste of the fall of the Soviet Union and his need for political survival?  By creating an external “enemy,” Putin wants to keep his authoritarian regime not only in power but totally dominating all of Russian society.  It was the model under Stalin.  Indeed, as some observes have speculated, is he simply somewhat “mad” and a prisoner of his own “idée fixe.’

Putin has developed, absent a largely discarded Marxism, an attitude that induces hatred of the West and Western democratic culture while at the same time reigniting extreme Russian nationalism and xenophobic emotions.  These are tactics used by Stalin, Mussolini, Hitler, some of the modern European far right groups like The Alternative for Germany and Le Pen’s National Front , in growing authoritarian countries like Egypt and Turkey, and now in the U.S. by Trump.

Within the cadre of Russian scholars and watchers, there appears to be two schools of perception about the nature of the rise of “Putinism” and its goals as well as what the stance the West – in particular the U.S. – should be.

In one group we find the largely discredited Neo-Cons, the ideological militaristic “super-hawks” of several stripes who believe that war is the only answer.  Included in this category are the Republican adherents to the cries of our ever-greedy “military-industrial complex” as President Eisenhower put it and those who simply adhere thoughtlessly to the cry of American dominance.  They leech onto, as I have said, to the Cold War argument that Russia is “ten feet tall.”  This group believes that there is no real accommodation we can make with Putin and that conflict of some kind is largely inevitable.

On the other side, there are those who think that the “bogeyman” image of Russia is overdone and that we can live in peace with Russia by giving Putin much of what he wants in his “sphere of influence.”  They hold to the theory that this will calm his lust for aggression and revenge.  In particular, they feel that the expansion of NATO into Eastern Europe was and continues to be wrong.  Some hold that we do not need to fear a Russian rise of power, and that a reasonable accommodation with Putin is not only possible but also desirable for global peace.

Let me be clear I have set deliberately up some straw men/women to make a general and I think valid point about the how different groups want to deal with Russia and its actions. Frankly, neither school is completely right and neither is completely wrong, and history will largely judge and provide some fair assessment of this strategic question.

Part of our problem is that these two “right-wing and “left wing” assessments alone cannot be a good long-term strategy for dealing with Russia that we see today because of their rigid nature. Each side selects their own “facts” to paraphrase my old boss Pat Moynihan. And thus each is a prisoner of a narrow prism that seems not to include the full reality of the Russian condition and landscape and its threats and opportunities.

So what should be the strategy of the rest of the world towards the challenge that Putin has clearly laid down in the last few years?

The short answer is we must employ a variety of tools to deal with a very dangerous, complex, and highly unpredictable adversary.  The larger goal is to avoid a war and to prevent/deter Russia from acting in ways that would necessitate military conflict.  We need also to protect our allies from attacks and invasions.  Most importantly, over the long run we need to provide significant incentives that create an environment in which Russia will perceive that cooperation with the West is in its fundamental long-term interest given recognition of their restricted and moribund economy compared to our own growing strength.

An upcoming post will give more details on how this might be done and what policies and strategies – diplomatic, economic, and military – might bring this “win-win” outcome to fruition.  But it will take great unity and capacity among the West to make sure our democratic nations remain strong, grow, and are seen by Russians as a better model for their own society.

We welcome your comments!