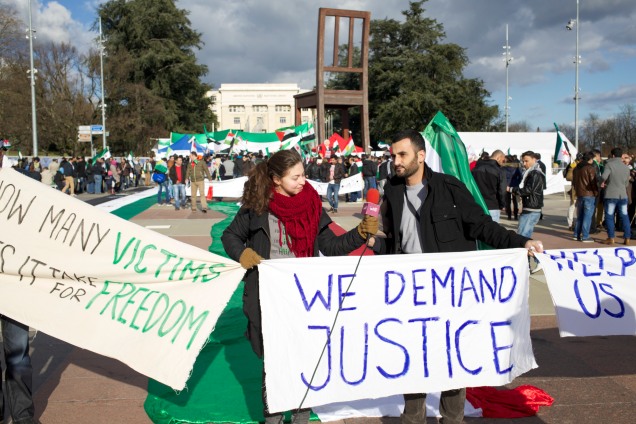 Once again there is continued unspeakable bloodletting in Syria. Now the guns have been turned on the convoys of humanitarian aid and relief and those escorting civilians out of the killing fields of Homs in Syria. Already, the conflict has left more than 100,000 dead and millions displaced and as refugees. It is high time that we had less posturing by all sides and a bit more serious diplomacy backed up by elements of sticks and perhaps a few carrots.

Despite the news that some more chemical weapons stocks have been placed on ships, this action has not stopped the brutal killing of Syrian civilians by the Assad regime. These deliveries have been delayed, and one has to wonder if this is not a deliberate ploy by the Assad regime to buy time for more killing.

Yesterday (2/11/14), there were two key items in the New York Times. One was an editorial “The Message From Homs” (http://www.nytimes.com/2014/02/11/opinion/the-message-from-homs.html?ref=todayspaper) which decried the horror of what is taking place in Homs and in other Syrian regions. It calls for diplomatic action and hopes for a Security Council vote to “improve on the pause and extend it to other populations centers.” Unfortunately, its suggestions all have the serious fault of needing Russia and Assad’s agreement, which is, frankly, next to impossible given how long they have supported butchery without end.

The other article was an op-ed by Danny Postel and Nader Hashemi: “Use Force to Save Starving Syrians” (2/11/14) (http://www.nytimes.com/2014/02/11/opinion/use-force-to-save-starving-syrians.html?ref=todayspaper), which calls for honoring the goal that was part of the UN resolution for “responsibility to protect” once more, and it argues for the use of multi-lateral force if necessary.  It stated that before any multi-lateral operation, which would include providing air support, “Mr. Assad and the rebel groups should be put on notice that they have hours to lift the sieges.” They call for us to “confront” Russia with a choice to convince Assad to lift the sieges or “be left behind by an international community that is prepared to act.”

For two years, this blog has advocated using a robust international peacemaking /peacekeeping force to provide security zones and to protect civilians in Syria. America and countries like Britain, France, the Arab league, and hopefully Turkey, should participate. The time has indeed come to act, and there is little doubt in my mind that diplomacy needs to be backed up with a bit of “sticks” to change minds and perceptions of the ultimate outcomes.  There are a number of ways that international actions can be taken with NATO and the EU— recognition of a new Syrian government of moderate groups, and agreeing to intervene based on their invitation via a willing coalition that is strong enough and wide enough to gain common acceptance. This is already being done in Africa and has been done elsewhere.

The Geneva II session will resume this coming Monday between the Syrian regime and a coalition of rebel groups with participation of the key powers, including the U.S., Russia, Britain, France, and some Arab League countries. The United Nations is hosting the meeting. The first session made little progress except getting the two warring sides into the same room. There was no real cease fire, given the attacks on the convoys and civilians, and no agreement on a true transition to a new government without Assad in charge.

At the moment, eyes are turning to a possible but increasing less likely resolution in the UN Security Council demanding humanitarian access and help to some 25,000 civilians in various pockets who are threatened by the Syrian government bombings and mass killings. As noted above, success of this effort will probably only result from clear threats that multi-lateral intervention by some kind of force will follow.

It seem neither the British, who first proposed the resolution, nor America and France, now engaged according to yesterday’s joint press conference in Washington with President Obama, have the will to put it on the table for an actual vote, but the trend is moving in that direction. A negative vote may give more support for direct international action. In any case, it is likely the Russians, acting to protect their genocide allies in Syria, and the Chinese, who do not want effort to save innocents killed by their government to set a precedent for the future, will veto such efforts. This inaction is due to cowardice or perhaps calculated prudence and fear by all sides.

One of the lessons of the Syrian tragedy is that the international community needs new tools, powers, and capacity to act under the UN agreed “responsibility to protect” mandate that can overcome the deliberate efforts of authoritarian regimes like Russia and China to prevent mass killings, “ethnic cleansing,” genocide, and massive humanitarian crises. This is a decades long project, and the question is whether there is some precedent that can now be set that will move the international community towards this objective.

Perhaps the time has come to establish new institutions for such action, based perhaps on a super-majority vote in the U.N. General Assembly and a majority vote of the entire Security Council without a veto. Otherwise, other options might be acting through old or new institutions like NATO, and/or the EU, or perhaps an offshoot of an United Nations agency, with its own decision making capacity, backed up by “coalition of the willing” of responsible powers with multi-lateral military force supplied by organizations like NATO and others that might join. In the end, teeth need to be applied to a world where brutality will only respond to countervailing force. However, even here the initial path should be via diplomacy.

We welcome your comments!