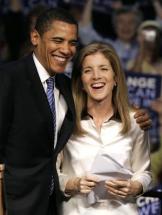 We can hope the reporting was just an April Fools joke, but is there really a possibility that President Obama is considering sending Caroline Kennedy as American Ambassador to Japan?  Has she had some related experience?  How good is her Japanese?  Would she like to join the ranks of those who, for no substantive reason, are charged with representing the USG and the American people in countries of great importance to the US and its national security?  Has she contributed money to Democratic candidates -Obama or others – or is she expected to do so in the future, or is it a question of family name and reputation?  Let’s hope it was a joke, but the matter of political appointments to ambassadorships abroad is not funny.

It was also reported recently that Hillary Clinton is for the moment not accepting donations to the presidential campaign she is widely expected to conduct as 2016 draws near.  Now, then, is the time to extract promises in advance from potential or declared successors to Obama that professionals, i.e., experienced foreign service officers with proven expertise, will be assigned to run our embassies and conduct relations at the highest level in foreign capitals.  Obama has outdone his predecessors in rewarding big donors with nice embassies in glamorous capitals or sunny climes, continuing the practice of hampering the conduct of foreign relations and insulting our friends abroad in the bargain.  Our recently departed Secretary of State, who is surely aware of the problem, should be bombarded now with pleas that she should discontinue this disgraceful, purely American, sale of our embassies to the highest bidders.